Yesterday the news broke that professional footballer Stiliyan Petrov has been diagnosed with acute leukaemia. The Aston Villa captain complained that he felt very unwell after a league match against Arsenal last weekend.

Leukaemia is a cancer of the blood which occurs when the bone marrow produces a large number of abnormal cells. In the blood there are three types of cells. Red blood cells carry oxygen, platelets help to clot the blood and white blood cells help fight infection. Billions of new cells are produced in the marrow daily, most of which are red blood cells. When the marrow starts to produce too many white leukaemic blood cells they interfere with the healthy blood cells making those diagnosed highly susceptible to infections, bleeding because the blood can’t clot and bruising.

Acute leukaemia is a rapidly progressive disease which requires immediate treatment. The cancer cells in acute leukaemia cases start to multiply before they get to a mature stage. This type of leukaemia often affects young people and children and is most common in Caucasian men.

My Dad was diagnosed with a leukaemia known as ‘Acute myeloid leukaemia’ in March 2010. His symptoms included a fever, aches and pains and finally bleeding from the gums. It was after he woke in the night to find blood all over his pillow that he decided to ring a doctor previously thinking he had a bad case of ‘man flu’. The doctor immediately told him to drive to hospital because they suspected he may have leukaemia and told him to notify his next of kin.

The symptoms mentioned above are common in acute leukaemia, another symptom is repeated infection and bruising without any blow or fall. An unnaturally pale complexion can also be a symptom.

Over the next few weeks my Dad remained in hospital and was highly susceptible to infection and bruising. He was given chemotherapy which made visiting extremely difficult as its effects are very hard hitting. He lost a lot of weight and all his hair, including his eye-lashes. He also had bruises all over his arms and legs after his injections. If any of the family had even a sore throat they weren’t allowed to visit.

Acute myeloid leukaemia has the highest recovery rate of all leukaemia and thankfully my Dad recovered, is now in remission and able to lead a normal life again. 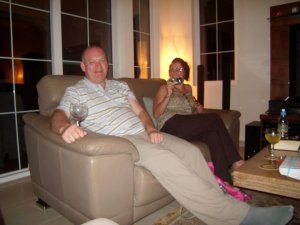 My Dad is now in remission and enjoying life.

It is also fortunate that the doctor’s at Aston Villa were able to make an early diagnosis on Petrov and hopefully he too, with the help of his family and friends will be able to make a speedy recovery.

For more information about Stiliyan Petrov’s diagnosis and the publics response click here.

For more information on all types of leukaemia some useful website’s to visit are:-

This week, The Awkward Pint are awarding 'Man of the Week' to Actor, Dustin Hoffman. Hoffman, 74, assisted jogger, Sam Dempster after he collapsed in Hyde Park. Hoffman alerted the paramedics and stayed with Mr. Dempster until the paramedics showed. Have a pint on us Dustin!

Who's having a pint with us?